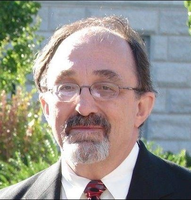 Charles (Chuck) Keith Lambrinos, Age 72, who resided at 811 Monroe St. Endicott New York, succumbed to multiple health issues on Feb 1, 2020 under the loving care of the staff at Mercy House Hospice. Charles was born Nov 23, 1947 in Endicott to parents Charles and June Lambrinos. He was the middle child of three. Charles married Maria Guadalupe Rivera in 1968 with him he has four children Keith, Estela, Adrian, and Kevin (now deceased). Later he married Debbie Lambrinos (now deceased) in 2006. He honorably serviced in U.S. Army from 1969 through 1973 at Ft. Bliss in El Paso Texas. Charles worked for Catholic Charities for more than 30 years where he retired. Charles loved spending time with his grandkids. He was very proud of all his children and grandkids and often talked to his co-workers about them. Charles is survived by his eldest son Keith Charles Lambrinos, daughter Estela Giles with husband Michael Giles, who dutifully cared for him in final months, and youngest son Adrian Lambrinos with his wife Sara Beth Lambrinos. Grandchildren are Esteban Giles, Anyssa Giles, and Marisol Giles, as well as Liberty Lambrinos and Rainy Lambrinos. Charles is also survived by his eldest sister Christine Lambrinos Figured and younger brother William Lambrinos. Charles posthumously follows his wife Debbie and youngest son Kevin Michael Lambrinos. Services will be held on Saturday Feb 8th at 1:00PM at Coleman & Daniels Funeral Home, LLC., 300 E. Main, Endicott, New York. All are welcome to attend and are invited to bring flowers for adornment. Charles children would like to thank Mercy House Hospice for their superior care in their hour of need. He was deeply loved and he will be deeply missed.