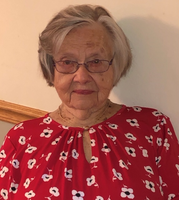 Mildred Emma Benson, 100, of Vestal, NY passed away peacefully just past midnight Tuesday, June 9, 2020 at Willow Point Nursing Home in Vestal. Mildred was born September 14, 1919 on the West Side of Binghamton, NY the daughter of the late Byron Floyd Page & Pearl (Tyrrell) Page. She was predeceased by her husband of 42 years William A. "Bill" Benson in 1991, her brother Clifford of muscular dystrophy in 1929, her sister Viola Hoopes in 2003, and beloved granddaughter Kristin Carpenter in 1990 and son-in-law Art Carpenter in 2007. She is survived by her daughters Linda Carpenter of Clarence, NY and Sandra Ahearn and husband John Ahearn of Clover, SC and by her son William Garth Benson of Vestal. Her grandchildren, Tracy (Carpenter) Langlotz of Clarence, Nathaniel Ahearn of Mountain View, CA and Brian Ahearn of Charlotte, NC. Step-grandchildren Tim Ahearn, Christine (Ahearn) Tanguay, and Allison (Ahearn) Fuller. As well as her great grandchildren Maddy, Ben, and Jackson Langlotz, Asher and Arden Ahearn, Keegan and Colin Tanguay, and Hayden Fuller. Mildred grew up in Binghamton, living on the North and South Sides until the Pages finally settled in her beloved West Side on Lathrop Ave. where she met her closest and longest friend in life, Jane (Dewey) Cash. After graduating from Binghamton Central she attended Cortland State then Buffalo State, earning a degree in teaching. She would remain lifelong friends with her Cortland college roommate Ruth Mead who passed away just a year prior, who would always refer to her by her college nickname "Pagey". She and Bill would marry on May 29, 1948, they would build a house and move their family to Vestal in 1955, where she would live the rest of her life. There she and Bill were two of the original members of Calvary United Methodist Church. She would return to teaching first as a substitute, and then full time in the Vestal School District teaching at Willow Point Elementary and later at Vestal Hills Elementary. For years former students would encounter her and fondly recall the year they had spent with "Mrs. Benson". She retired from teaching in 1977 and began focusing on hobbies and crafts, knitting, sewing, and quilting, practical crafts that she enjoyed throughout her life. She even taught her 3rd grade classes how to knit, which a handful of students continued as adults. She became an accomplished artist, mostly in oils, good enough that she was occasionally commissioned for her work and was a long time member of the Fine Arts Society of the Southern Tier (F.A.A.S.T.). She was member of the Broome County Retired Teachers Association and the Daughters of the American Revolution (D.A.R.). She will be fondly remembered and greatly missed for her continuous good humor and kind heart, for playing the piano (until she was 99), her patience, her love of animals (a lifetime of adopted stray cats) and her overall sense of fairness. In lieu of flowers donations can be made to the Kristin Carpenter Scholarship Fund, Clarence Central School District, 9625 Main Street, Clarence, NY 14031 or to the Muscular Dystrophy Association.