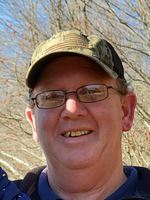 Timothy Orion Warfle, 59, of Vestal, NY. It is with great sadness and heavy hearts that the family of Tim Warfle announce his peaceful passing at home on August 20th, 2020 after a brief illness. Tim was predeceased by his father, Orion John Warfle, and his step-daughter Megan Dunham. He is survived by his wife, best friend and the love of his life, Kimberly Dunham-Warfle, cherished daughter, Rachel Warfle and "second to none" son and daughter in law Daniel and Karen Dunham and his much loved granddaughters, Emma and Molly (who lovingly called him Poppa). He is also survived by his mother, Bernice Warfle, sister and brother-in-law, Rose and Ken Schlock, sister, Cindy Sherwood, father in law, James Riley, mother in law, Jessie Riley, sister-in-law Bridget Gary, sister in law Caroline Riley as well as his cherished nieces and nephews…Amy, Dan and Kaida Reynolds, Tiffany, Blake and Jayce Nesbit, Samantha Shaheen, Patrick Bonnano, Patrick and Jamie Sherwood and family, and Jennifer Sherwood. Tim was born and raised in Vestal, NY and graduated from Vestal Central High School. He worked for 30+ years at Harris Assembly Group in Binghamton, NY. Those who knew him knew he was the best that a person could be…kind hearted, honest, loved his family and enjoyed immensely hunting and running his beagles whether at home or at Island Pond, VT running hare for a week at a time… that was when he was the happiest. He also picked up gardening later in life and very much enjoyed working that massive garden at home any chance he could get and sharing the produce with friends and family alike. His absolute best of days were spent outside in the fresh air hunting with family and friends or running his beloved beagles. He will also be remembered for his somewhat sarcastic sense of humor and one liners that he dropped out of nowhere that were always hilarious and appropriate (and yes, sometimes inappropriate), as well as the grit and determination he had throughout life to be the best he could be no matter what obstacles got in his way. He very much valued the great, long lasting, deep rooted friendships he had with so many people, the love of his family and the comfort of his home. A Funeral Service will be held on Thursday, August 27 at 10:00 a.m. at the Coleman & Daniels Funeral Home, 765 Main Street, Vestal. The Rev. Mark Kimpland officiating. The family will receive friends at the funeral home on Wednesday, August 26 from 4:00 to 7:00 p.m. Please be conscious of COVID requirements – social distancing and face masks required.