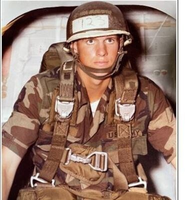 Endwell - John Gregory Krissell, 56, of Endwell, NY, battled post-cardiac surgery complications for six-months and left this life peacefully to be with his Savior on August 21, 2020. Born October 28, 1963 in Johnson City, New York, son of Mary Jane and Donald Krissell. He is survived by three living siblings - Laurie Bennett, Steve Krissell, and Katie Tise (and her husband, Nick Tise). He is predeceased by parents and sister, Julie Krissell. John has eight nieces and nephews: Laurie's children - Rachel Conklin and Jeff Bennett (and fiancé Courtney Mancini); Steve's children - Justin Krissell (and wife Jessica Krissell) and Sydney Krissell; Julie's children - Ty Gerald Lee Krissell and Casey John Krissell; and Katie's children - Ayden Tise and Allyson Jane Tise. Also survived by four great nieces and nephews: Rachel's daughter Hailey Conklin and Justin's children - Jayden, Julien, and Jeremy Krissell. John graduated Vestal High School in 1982, completed a four-year US Army tour where he excelled in Paratrooper and Ranger Schools. He made a choice to forgo an awarded opportunity to attend West Point Military Academy, instead earning an Associate's degree from SUNY Delhi with a plan to return to the Triple Cities and follow in his father's footsteps using his mechanical skills and becoming a Master Plumber. He learned much of his trade skills as a young child acquiring mastery through his teen years in providing service to countless customers. His heart of gold served tremendous gifts to family, 'chosen' family, as well as, those he admired and all sorts of people. A significant piece of his legacy is the role he took on in raising Ty and Casey in 2015 after the tragic loss of their mother. Special thanks to 'chosen' family who loved and supported him over his decades of service including Chris and Nick Jogo, Justin Marchuska, Dominic Fata, Rich Griswold and Marty Carl and his family. A Celebration of life will be planned as soon as it is safe to do so.