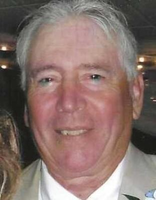 Robert D. Gorgrant Jr. 75 died on August 24, 2020 after a long battle with Alzheimer's Disease. He is survived by Carey his wife of 46 years, son Gedney and girlfriend Lori, son Vernon and wife Katy, special granddaughter Saylor and brother Joel and wife Kathy. Bob graduated from North High School where he was a 1962 Sun Bulletin All Triple Cities basketball player. Following graduation, he attended Augusta Military Academy in Staunton, Virginia where he was the most Valuable Player of the Virginia Military League in 1962-1963. In 2008 Bob was inducted into the first A.M.A. Sports Hall of Fame. Bob earned a basketball scholarship to the University of South Carolina where he played for legendary coach Frank McGuire. After graduating he returned to A.M.A. where he taught history and coached the basketball team. Bob returned to Binghamton in 1970 and was hired to teach 5th grade by the Vestal School District where he was also the Junior Varsity Basketball Coach and eventually led his team to a JV State Championship. Beside basketball, Bob's other passion was golf. Although he didn't take up the sport until his early 20's, he soon became an excellent player – winning several local tournaments. However, his proudest accomplishment was playing at St. Andrews golf course in Scotland and shooting a 2 under par. Bob was not only a gifted athlete, but also a master gardener, which he demonstrated in the beautiful lush landscaping around their cottage home. As brother- in-law Randy Smith said, "Bob was not just a lover of nature, he was a force of nature." He also mastered the art of carving duck decoys and his works of art are displayed in the homes of many friends. In 2005 he won an award at a major decoy show. Of all his accomplishments, Bob was most proud of his career as a teacher. He inspired in his students a love of nature and the outdoors. He didn't just have his students read about nature, but took them outdoors where they hung bird feeders, collected specimens and recorded observations in their nature journals. Some of his former students have revealed that they still have their nature journals. One special student had a book published about Binghamton's nature preserve and she dedicated it to many including Mr. Gorgrant. "I don't think I would have done this without my 5th grade nature journal project." Just as Bob inspired his students, Bob was inspired by the work of John James Audubon and his magnificent book "The Birds of America" and unfortunately, Bob also developed dementia as did Audubon in his later life. Audubon's dear friend John Bachman wrote in a letter to his wife in 1847 which said, "Alas, my poor friend Audubon! The outlines of his beautiful face and form are there but his noble mind is all in ruins. It is indescribably sad." The family would like to thank the entire amazing staff on South 1 at Willow Point Nursing Home. As we embarked on a journey we did not choose, your kindness, caring and dedication in the most difficult times were truly heroic. We are so proud to call you our friends and knowing you has been a blessing. The family will receive friends at the Coleman & Daniels Funeral Home, LLC, 765 Main St., Vestal, Friday, August 28th from 2 – 4 p.m. In lieu of flowers contributions may be made in Bob's memory to the Alzheimer's Assoc. of Central N.Y., 441 W. Kirkpatrick St., Syracuse, N.Y. 13204.