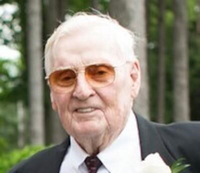 Nash,Texas - Walter M Glanville September 8, 1927 - December 22, 2020 Walter M Glanville, 93, of Nash, Texas, went to be with his Lord and Savior on December 22, 2020. Walter was born in Carbondale, PA on September 8, 1927. He moved to upstate New York where he joined the Navy at 17 years old during World War II. After the war ended he returned to Waterloo, NY, where he met his beloved wife Alice Irland. Together in Johnson City, NY, they raised 4 children and were married for 46 years until Alice's passing in 1994. Walt retired after being a firefighter for 32 years and traveled the world. In 1997, he met his wife Sarah Jo Jackson in Amsterdam, Holland and they married in 1999. They made their home in Nash, Texas where he gained a second family. He was predeceased by his wife Alice, sister Jean Glanville, and brothers Bob and Clarence Glanville. He is survived by a brother Jim Glanville and his wife Judy, his daughter Diana and her husband Richard, daughter Cindy Glanville, son Scott Glanville, and son Steve Glanville and wife Barb. He is also survived by many grandchildren and great grandchildren that loved him dearly. The family will receive friends on Tuesday, January 5, 2021, from 5:00 - 7:00 pm at Coleman and Daniel's Funeral Home in Endicott, NY. Entombment will be in Arlington National Cemetery at a later date.