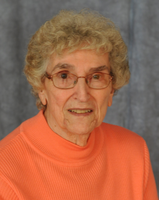 Frances Louise Holden went to be with her Lord and Savior on February 11, 2021 at the age of 91. She shared her life with 13 other siblings, of whom seven have also passed, including Albert Welch, Ronald Welch, Donald Welch, Eugene Welch, Lillian Beeman, Helen Brown, and Lucille Clink. Her six surviving siblings include Irene Welch, Dorothy Pease, Mary Haining, Lawrence Welch, Leland Welch, and Eleanor Browning. She is also survived by her five children: Jean (Holden) and John Rozelle, Elaine (Holden) and James Maxam, Gerald Holden, Carol (Holden) and Kenneth Payne, and Richard and Deborah Holden. She also leaves behind 13 grandchildren and 19 great-grandchildren. Frances was born at home on December 8, 1929 in Union, NY, in the township of Endicott. She was the second child and oldest daughter of 14 children in the Leon Welch family. She spent the first eight years of her life living in Maine, NY. In 1937, her parents moved to Warren Center, PA, and she continued to live her adult life in either Owego or Apalachin, NY. She was married to Bernard Holden on June 20, 1953 at the South Owego Community Church. They were married 36 years until his death on May 22, 1989. Being the oldest girl in a large family, Frances not only helped with many of the household chores but also helped raise her younger siblings. She loved babies and was known to be able to put a baby to sleep within minutes. During her young teenage years, she painted buildings, cooked meals, cleaned houses, did laundry, and babysat for friends and neighbors. At age 16 she went to work at Endicott Johnson where she continued working until she was married. She spent the next 13 years raising her own family of five children. In 1967 her husband became part owner of the Athens A&W restaurant, where she re-entered the work force, working alongside her husband and family until the mid-1970's. Her last job was from 1979 to 1990 at Magnetic Lab Incorporated (MLI), where she worked as a solderer. While employed there, her husband passed away leaving her a fairly young widow at the age of 59. After retiring at the age of 61, she continued to live close to her family for 30 years. Frances loved getting together with her immediate and large, extended family. For 35 years she graciously hosted the Holden family dinners each month, keeping the family close as they loved to share the latest and greatest stories and reminisce about the past. Frances was a long-time member of South Apalachin Baptist Church. If you would like to give in memory of Frances, we ask that you contribute to the Memorial Missions Trust Fund at the South Apalachin Baptist Church. A memorial service will be scheduled at a later date.