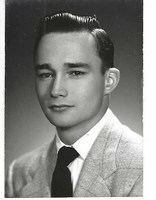 Binghamton - Philip J. Colella, aged 85, died at home on Thursday, March 11th. He was predeceased by his parents, Philip J Colella Sr. and Lillian Pearl Colella, and his son John M. Colella. He is survived by his devoted wife of 57 years, Elsie Colella, sons Philip Brad Lee Colella and James Colella (Karen Eaton), daughter-in-law Carolyn Colella and beloved grandson James Q. Colella of Hopewell New Jersey, and his brother Dr. Michael Colella of Endicott. Philip was born in Endicott NY and graduated from Union-Endicott high school in 1954. He attended Tufts University where he earned a BS in Biology and was a member of Theta Delta Chi fraternity. Continuing on at Tufts, he earned a DMD degree in 1962 from the Health Science Department. He also attended SUNY Binghamton taking coursework in Anthropology, and the NYS Bureau of Municipal Police where he earned a certificate as a police officer. Philip was a veteran of the United States Air Force, serving in the Air Defense Command with the rank of Captain. Afterward he opened a dental practice in Owego NY where he worked as a general dentist for over forty years. He also volunteered with the Tioga County Sheriff's department as a police officer. Doc enjoyed the outdoors, camping, hunting and fishing, and always preferred to drive the back roads. He was a consummate storyteller, and his tales (often repeated) will be missed. The family would like to thank Lourdes Hospice, particularly Shannon, for their compassionate care in the recent weeks. "Let us probe the silent places, let us seek what luck betide us; Let us journey to a lonely land I know. There's a whisper on the night-wind, there's a star agleam to guide us. And the Wild is calling, calling… let us go. " Calling hours will be held at Coleman and Daniels Funeral Home LLC, 300 East Main St, Endicott on Thursday, March 18th between the hours of 4 and 6 PM.