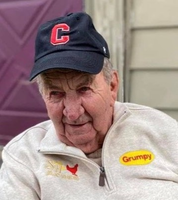 Norman David Davis, 90, of Vestal, NY passed away on May 8, 2021 after a long and full life with his children by his side. He is predeceased by his wife of 55 years, Ruth B. Davis, his Parents Elizabeth and John R. Davis of Syracuse, NY and his Brother, John (Jack) D. Davis of Raleigh, NC. He is survived by his Son, W. Bradley Davis, DVM (Jeani) of Woodbury, Conn. and his Daughter Kristen Rickenback (Fred) of Vestal, NY, and his Sister in law, Dorothy Davis of Raleigh, North Carolina. The joy of his life, his Grandchildren, David Rickenback (Nikkie) and his Great Granddaughter Avery, Daniel Rickenback, Molly Rickenback (Dan, Piper, Luca and Makenna), Sam Rickenback (Emily), Jessica Davis (Ray) and step-Grandchildren Kyle Davis and Cecelia Ertel (Maiya and Gabriel). Also special Nephew and Niece, Pat and Bruce Davis, as well as Diane, Scott and Eric Davis. Norm is now celebrating with Ruth - his one true love. They met as children, went to their Sr. Prom together and married on Valentine's Day in 1953. He graduated from Syracuse University and served in the United States Army as an officer. They raised 2 children and were so very proud when Brad pursued his education and career in Veterinary Medicine. Norm spent his whole life loving Ruth and trying very hard to make all of her dreams come true. He spent countless weekends hauling horses to horse shows all over the East Coast because that's what made her happy. They were one of the founding members of Animal Care Council - rescuing cats, dogs, horses- any animal needing rescue, they were there. He was a Manager at IBM where he was a proud member of the IBM Quarter Century club. In his younger years, he loved fixing things and building things with his best buddy, Teddy, and took great pleasure working around his farm - mowing lawns, fixing fences and acquiring all kinds of animals. He was a good Dad, but an even better Grandpa. Norm taught his Grandchildren how to work hard and love well. They all inherited his strong work ethic. After losing Ruth, his love, to Cancer in 2008, his focus turned to working at the food pantry at Park Terrace Community United Methodist Church with his buddy, Larry. He made sure the shelves were full and there was plenty of food for all that needed it. He loved having lunch every day at the Skylark Diner, especially when one of his Grandchildren joined him. He enjoyed teasing the waitresses, especially his favorite one, Molly. The last year has been tough as Dementia slowly invaded him and he lost his independence. He loved visits from his Grandkids and his 2 Donna's, contemplating mowing the lawn with his buddy, Fred, and sitting by the barn watching "those darn chickens". He missed Ruth terribly and it was time to reunite. They are celebrating together now after she drilled him about what took him so long to get there! He was a gentle, honest, kind man, an adoring husband and a caretaker to his family. A friend to any person or animal that needed his help. He left the world a better place by the way he lived his life. There will be a celebration of his life at his beloved farm, 104 Nelson Rd. Vestal on Sunday June 6th from 2:00- 6:00. Please feel free to stop by any time that afternoon to share a Norm story and remember him. There will be a short service around 3. Please remember that parking may be limited, so prepare to walk a bit! Parking for those with limited mobility will be saved near the house. Please consider memorial donations to Park Terrace Community United Methodist Church Food Pantry or Animal Care Council.