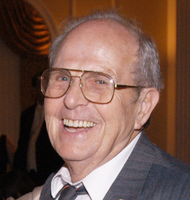 On Friday, June 4, 2021, Wilbert C. Murray, loving husband, father, grandfather & friend, passed away at the age of 86 at Vestal Park Nursing Center. He was born on October 8, 1934 in Pittsburgh, Pa. to William and Bertha Murray. On July 5, 1956 he married Therese Moreau. They raised three children, Patricia, Richard & Suzanne. Wilbert was predeceased by his wife, Therese, his parents, William and Bertha Murray, his brother, Donald, and his sister, Dolores. He is survived by his sisters, Ruth Marie, Barbara and Marlene, his children and their spouses, Patricia (Murray) & Brian Nestlerode, Richard Murray & Antoinette Mancini, Suzanne (Murray) & Scott Morgia, and 4 grandchildren who were his pride & joy, Nicholas, Gia, Adrianna and Marcella. Wilbert enjoyed polka dancing, music, working on the computer and fixing things. Wilbert was a member of the Knights of Columbus and for a time served as the treasurer. He loved going to the casino with friends. He loved to travel and visit new places. He had a great sense of humor and enjoyed meeting and talking to new people. We would like to thank the staff of both the Pavilion and Brookside Gardens for their loving and compassionate care of him during his time there. A funeral service will be held at 10:00am on Wednesday, June 9h at Our Lady of Sorrows Church, 801 Main St. in Vestal. Reverend John Donovan will officiate. In lieu of flowers, please consider making a donation to the Alzheimer's Association.