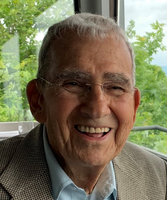 Eugene (Gene) R. Ninnie, 89, of Apalachin, died peacefully surrounded by his family on October 7, 2021 at Elizabeth Church Manor in Binghamton. Preceded in death by his parents, Eugene A. and Philomena Ninnie, Gene was originally from Beacon, NY. First of his family to graduate from college, he received a BS in Civil Engineering from the Pennsylvania Military College in Chester, PA in 1953. He graduated from PMC as Second Lieutenant in the US Army, completing his service at Ft. Hood, TX. In 1956, he and his wife Betty (Elizabeth Lang), also originally from Beacon, and infant daughter relocated from Texas to Apalachin when Gene accepted a position with IBM's Federal Systems Division in Owego where he remained his entire career. He retired in 1994 from his position as Manager of Plant Engineering but then went on to work for Loral Corporation (now Lockheed Martin) for two more years. He lived, breathed and remained fiercely loyal to IBM well past retirement, gathering with a number of his IBM buddies for breakfast monthly at the Blue Dolphin diner until COVID and Alzheimer's got in the way. In addition to his parents, Gene was preceded in death by his daughter Nancy Marie, brother Armand and nephews Jeffrey and Thomas. He is survived by his devoted wife of 67 years, Elizabeth (Betty), sister-in-law Helen Lang, and his four children, Diane Roberts (Jim) of Pittsburgh, PA, Eugene D. Ninnie of Pinedale, WY, Patricia Allen (Will) of Marietta, GA, and Michael Ninnie (Steve Gyurcsak) of Atlanta, GA as well as two grandchildren, Katherine and Matthew Roberts. The family wishes to thank the staff of the third floor of Elizabeth Church Manor for their kindness and care. They are saints on earth. The family will receive visitors from 1:00-2:00pm on Tuesday, October 12 at St. Joseph's Church, 207 Hayes Avenue, Endicott, NY, immediately followed by a Funeral Mass. Burial will take place in Beacon, NY on Wednesday, October 13 at 1:30 p.m. at St. Joachim's Cemetery. In lieu of flowers, donations can be made to St. Joseph's Church, Endicott, NY or to the Alzheimer's Association.