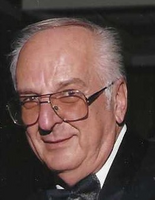 Michael Savka of Vestal, New York passed away after a long battle with COPD on October 8th, 2021 at Lourdes Hospital. He is predeceased by his parents, two sisters Lillian Nerterick and Dolores McGowan and his wife and best friend, Gerlinde "Linda" Savka. Mike is survived by his daughter and son-in-law, Tracy Lynn & Christopher Ryan, grandson, Cameron George and granddaughter Kendal Ryan, brother and sister -in-law Paul and Colleen Savka and numerous nieces, nephews and cousins. He is also survived by his friends for life, Len Smith and Chuck Tarry. His family would like to thank Bob Pulz and the best neighbors anyone could have asked for to help him as they have over the last few years. He always spoke highly of his neighbors and what great people you are. We would also like to thank Taryn and Ashley for all the support and kindness they showed Mike. A Funeral Mass will be offered on Friday at 10 a.m. at Our Lady Of Sorrows Church, Vestal, with a Military Service immediately following. The family will receive friends at the Church on Friday from 9 a.m. until the time of the Mass. In lieu of flowers, please donate in Mike's name to the Outreach Ministries of Southern Tier, Attention: Children's Christmas Fund, 9 Leroy Street, Binghamton, New York 13905.