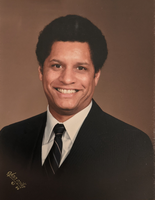 Rawn Wardell Spearman, Jr was a devoted husband and loving father who unexpectedly left this world on October 15th, 2021 at the age of 76. Rawn was born to Dr. Rawn W. Spearman, Sr and Daisy Leathers Spearman in South Boston, Virginia in 1945 but spent the majority of his childhood in Harlem, New York. He graduated high school from St. Emma Military Academy in Powhatan, Virginia and spent his college years at Howard University where he graduated with a Bachelor of Science in Electrical Engineering. Rawn continued his education at Binghamton University where he earned a Master of Science in Advanced Technology. Rawn continued his many accomplishments that made his family very proud and became an Engineer at IBM where he was recognized for the achievement of his invention the "Parallel Signature Response Comparator," in December of 1984. Rawn was very involved in his community as well as contributing to the betterment and support of those around him as the Director of the Board at The Family & Children's Society. He was also very involved as a Lukens-Jackson Summer Camp Counselor during it's Day Camp where he volunteered with local youth as an extension of his ministry through Central United Methodist Church where he was an avid member of the congregation for 44 years and a tenor in the choir. Rawn was an education advocate. Following his retirement from IBM, he taught SAT Prep Courses at Broome Community College where he was also a professional tutor at their Learning Assistance Center. Rawn was always striving for greatness and became an excellent public speaker in the Toastmasters International Communication Program where he achieved the level of Advanced Communicator Gold (ACG) which is the highest communication recognition the organization offers and was also awarded by the organization for Leadership Excellence. In his free time Rawn enjoyed archery, nature, and gardening. Rawn was a beloved husband, father, grandfather, and friend. He was predeceased by his father Dr. Rawn Spearman, Sr, his mother Daisy Leathers Spearman, his stepmother Dr. Carlesta Spearman and his stillborn daughter Angela Joy. He is survived by his wife Donna of 50 years, his son Aaron and his wife Shannon, his daughter Tiffany, his grandchildren Zoe and Jaden, his sister Amadis Noel Spearman, his stepbrother Dr. Ralph Saunders II and his wife Rebecca, his stepsister Arienne King-Comer, his brother-in-law Ross A. Washington, Jr, his 100-year-old Aunt Olivia Parker and several treasured cousins and nieces/nephews. Funeral services for Rawn will be held Thursday, October 21st, 2021. A family Greeting Hour will take place from 10am – 11am EST and the Memorial Service will take place from 11am-12pm EST. Services will be held at Central United Methodist Church, 17 Nanticoke Avenue, Endicott, NY 13760 and also available to livestream at www.centralumcendicott.org. In lieu of flowers, please consider a donation to the Lupus Foundation of America marked in memory of Rawn W. Spearman, Jr. Donations can be made via www.lupus.org or mailed to Lupus Foundation of America, 2121 K Street NW Suite 200, Washington, DC 20037.