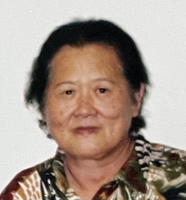 Fang Mei Leu (08-13-1934 to 02-08-2022) Fang Mei Leu was born on August 13th, 1934 and crossed over peacefully on February 8th, 2022 to join her beloved husband Thung Shing Leu (July 10th, 1932 – December 8th, 2010). Fang Mei was born in Tainan City, Taiwan in a loving home of Tiao Zhi Chiu (father, police chief) and Zai Suo Chiu (mother, home maker), with one older and two younger brothers and two younger sisters. Fang Mei had fond memories with her parents, siblings, relatives, and friends while living in her childhood home in Tainan. Fang Mei often spoke about her love for American movie classics at a younger age, such as "Gone with the Wind" and "Lawrence of Arabia". Fang Mei married to Thung Shing in 1963 at the age of twenty-nine years old, together they moved to Kaohsiung City, Taiwan to start a new family, where they had and raised their three children: Aileen Pan (1965), Lisa Cheng (1967), and Frank Leu (1971). Here, Fang Mei assumed the role of a home maker, honoring the tradition of her mother and managed the house affairs and took care of the family. In October 1983, with the help of her now pre-deceased younger brother Fang Kwai Chiu, Fang Mei and her family immigrated to the United States and landed in Flushing, New York. At the age of 49 years old, moving to a foreign land was a huge change. Fang Mei and Thung Shing decided to take on this challenge to provide their children and generations after a chance for a better education and life. For the many years that followed, they both endured countless hardships to make their goal a reality. In 1985, Fang Mei and her family eventually settled down in Binghamton, New York, where she called home and lived for 37 years. Fang Mei had worked in various jobs: such as an assistant chef and a care giver to young children. She was known to be good tempered, kind, and handled adversity with calm demeanors. She was the rock for Thung Shing and family during the time when he had a brain surgery to remove the pituitary tumor in 1992, and for the time when Thung Shing suffered a stroke in 2000 that placed him in the Bridgewater assisted living / rehabilitation center until his passing in 2010. During that 10 years, Fang Mei would take the bus or walk, and she would spend the day to care for and keep Thung Shing Company almost on daily basis. Fang Mei has always emphasized the need for academic excellence and to obtain a higher education to her children and grandchildren. Today, Fang Mei is survived by her oldest daughter Aileen Pan, MBA and her husband Jing Fong Pan, PhD together with three kids: Margaret Pan, JD, Peggy Pan, BA, and Ethan Pan, second year in medical school; daughter Lisa Cheng, MA and her husband Leo Cheng, MD with one child Ryan Cheng, a freshman at the University of California, Berkeley; and Frank Leu, PhD with three kids: Amelie Leu, a freshman in high school, Caden Leu, in sixth grade, and Vivienne Leu, in third grade. Fang Mei together with Thung Shing had achieved their dreams in providing the opportunities for her children the opportunity to have a higher education and the ability to achieve limitless goals. Fang Mei enjoyed her time spent with her family, siblings, relatives, and friends. Most fondly, Fang Mei loved to get out of work and rushed to meet up with Thung Shing for a cup of coffee at Burger King adjacent to the Binghamton Plaza just to unwind and chat. In the last few weeks of Fang Mei's life, it came to her children's understanding that for many years, she was afflicted with undiagnosed Lewy Body dementia, and as fate would have it that she was also admitted into the Bridgewater assisted living / rehabilitation center where Thung Shing passed peacefully. For some unknown reason, Fang Mei was transferred out of her assigned room and into the same room where Thung Shing had passed for over a week. We love you and miss you mom, but we know that you are now once again able to meet up with dad and enjoying that afternoon daily coffee together.