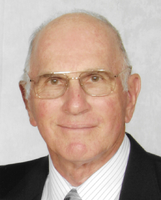 Emil Stastny, 90 years old, of Johnson City, NY was suddenly and unexpectedly called home to the Lord on Thursday, June 16, 2022. Emil is survived by his loving wife of nearly 60 years, Sandra Stastny, his son and daughter-in-law Christopher and Renee Stastny, his grandchildren Michael and Mia Stastny, his sister Mary Carlson, his brother and sister-in-law Rudolph and Judith Stastny, several nieces and nephews, and many friends. Emil was predeceased by his brother Joseph Stastny, his son, Mark Stastny, and grandson, Matthew Stastny. Emil was born in Endicott, NY. He took over his family's dairy farm for a few years after his graduation from Union-Endicott High School, before volunteering for military service. He served two years in the US Army and continued in the Army Reserve. Upon his honorable discharge from the service, he attended business school to learn to wire control panels and operate IBM accounting machines. He also began raising beef cattle and operating the family farm as his hobby. Emil was a long-time employee of Endicott Trust Company. He began his career in data processing and, after 31 years of service, retired as a Senior Vice President and Treasurer at Midlantic Bank, the successor bank of Endicott Trust. Emil was a long-serving and active member of Most Holy Rosary Church, the Knights of Columbus and the Endicott Sertoma Club, serving in a number of capacities in each organization. He continued working on the family farm after his retirement, which brought him a great deal of enjoyment and kept him very busy and active. He enjoyed helping others and spending quality time with his family and friends. He especially enjoyed his annual fishing trips to Canada, which he shared with his family and his friends for many years. Emil's family will receive family and friends on Saturday, June 25, 2022 at Most Holy Rosary Church, 2596 Main Street (Route 26), Maine, NY, beginning at 9:30 am. Visitation will continue until his Mass of Christian Burial at 11:00am, with Fr. Clarence Rumble officiating. Emil will be interred in Maine Cemetery at the convenience of his family. If you care to make a donation in remembrance of Emil, please consider Mercy House of the Southern Tier, 212 North McKinley Avenue, Endicott, NY 13760.